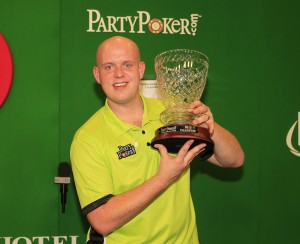 A glorious future surely lies ahead for Dutch darting sensation Michael van Gerwen, who became the youngest player ever to win a major title when he won the World Masters in 2006 at the age of 17.

In 2012 he won the prestigious World Grand Prix, claiming the £100,000 first prize and his first major PDC title.

‘Mighty Mike’ reached as high as third in the BDO rankings before he turned 18 and won several Open tournaments as a teenager.

A year after beating Martin Adams to be crowned World Master, van Gerwen joined the PDC. He had already played in some PDC events in his homeland with great success. He won the Dutch Open in 2006.

In his first year in the PDC, the Dutchman beat world number one Phil Taylor in straight sets at the Masters of Darts tournament. He achieved the impressive feat of a perfect nine-dart finish in the same competition against compatriot Raymond van Barneveld.

He won his first PDC title at the Players Championship event in Taunton in 2009, beating fellow Dutchman Vincent van der Voort in the final.

The following year, ‘Mighty Mike’ beat Mervyn King and Colin Osborne on his way to the last 16 at the World Championship, before his run was halted by an in-form Simon Whitlock. Van Gerwen gained admiration for his performance however, when he fought back from three sets down to level the match before eventually losing out.

Van Gerwen was presented with the prestigious Young Player of the Year award at the PDC’s annual awards dinner in 2012.

2012 proved to be a tremdous year for ‘Mighty Mike’ as he won six Pro-Tour titles in addition to his first televised tournament triumph in the PDC, coming back from 3-0 (sets) and 4-1 down to defeat Mervyn King in the final of the World Grand Prix.

He followed that up with a run to the final of the Grand Slam of Darts a month later, where he averaged over 107 in a 10-5 quarter-final victory over defending champion Taylor, before narrowly losing out to van Barneveld in the final.

He is currently ranked seventh in the world.

Walk on music: Breathe by The Prodigy

Get the hottest MVG stories straight into your inbox!

A Nigtht at The Darts Stevenage